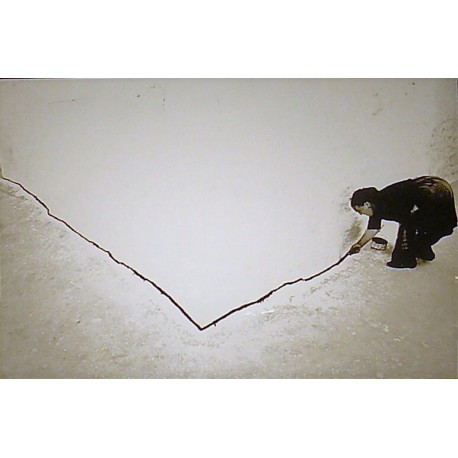 His interest in the world of photography began when he was serving in the military. Bored, he discovered the magazine Arte Fotográfico. He acquired a camera with the money that he was whispering to his father, took his first photos and enrolled in the photographic circle of the Casino del Comercio in Tarrasa.
He began the journey of reporting in 1953 with a work on Las Ramblas. The following year he joined the Photographic Association of Catalonia, sharing experiences with colleagues such as Ricard Terré and Xavier Miserachs. In 1957 he settled in Madrid and toured Spain working as a reporter for the magazine Gaceta Ilustrada. That same year he joined the AFAL Group, and together with his friends from the Madrid Royal Photographic Society, Gabriel Cualladó, Paco Ontañón, Leonardo Cantero, Joaquín Rubio Camín and Paco Gómez, he created the photographic group La Palangana.

Between 1958 and 1964 he worked for different magazines, such as the aforementioned Illustrated Gazette, Mundo Hispánico, Arriba o Ya, and exhibited his work in both individual and group exhibitions. In 1960 he received the Negtor Photography Prize. In 1962 he published the book Neutral Corner, by the Lumen publishing house, with texts by Ignacio Aldecoa. In 1963 he published Los Sanfermines with Espasa Calpe, for which he received the Ibarra Prize for the best edited book. He also exhibited with the El Paso Group in the Biosca room in Madrid.

In 1964 he published Viejas Historias de Castilla la Vieja with Miguel Delibes, exhibited with Carlos Saura at the Juana Mordó gallery and made his first documentary Prado Vivo, which won the special prize in Taormina.

In 1965 he directed El que Enseña, with which he won the Silver Miqueldi Prize at the Bilbao Film Festival. He moved away from photography for eighteen years to dedicate himself to making documentaries for TVE, where the general theme used to be the peoples of Spain and their customs, with series such as Conozca Ud. Spain, The Eve of Our Time, Los Ríos, Si the stones will speak ... This stage culminated in a feature film entitled Topical Spanish, with its own script and by the humorist Chumy Chumez, starring the musical group Los Iberos, Guillermina Motta, Victor Petit and José Sazatornil.

In 1981 he returned to photography and since then has published several books, carried out works for companies and institutions, including several documentaries for the Universal Exposition of Seville in 1992, and multiple conferences and exhibitions, both retrospective and of his most recent works, in rooms such as the Círculo de Bellas Artes, the Museo Nacional Centro de Arte Reina Sofía or the Royal Tapestry Factory in Madrid, the Palau de La Virreina in Barcelona, ​​the Palacio de la Magdalena in Santander, the Marlborough Gallery in Madrid or the headquarters of the Institute Cervantes in various cities of the world.

Works in different collections: the Reina Sofía National Art Center, the Royal Academy of Fine Arts of San Fernando, the Andalusian Center for Contemporary Art, the National Museum of Art of Catalonia ...